Well another big chunk of time with no update. I’m afraid that this one will be relatively devoid of mushing material, as the last couple of weeks have been packed with plenty of other action.
Towards the beginning of the month, I spent a week at home in Chicago for family reasons, and as soon as I got back, Morgan and I took off for a few days of camping and hot springing, which was a pleasant surprise. Our friend Scott came up for a week to learn the lay of the land from Morgan, and then took on the ranch by himself so that we could get away. Even though it rained throughout our trip, we were both excited about the relaxing (and free!) vacation.
Once we got back, we managed to get in a few days of running the dogs. We ran teams of 16 on quads and got some good, slow miles on almost everyone in our yard. I’m starting to see how the increased level of control on quads plays into some pretty strenuous training for the dogs. Hopefully the high expectations we’ll be asking of them this off season will make a big difference once the snow starts sticking again.
This past weekend, a friend and former employee of Twila’s came up to show Morgan and me the finer points of grooming the dogs. With Shandi’s help, we managed to groom nearly 30 dogs, which was quite a feat. I never knew how involved the process of grooming Malamutes was, much less an entire yard.
Since then, we’ve taken several days to prepare for two upcoming events here on the ranch. The first is a mushing boot camp with our friend Gery Allen, which is going to be put on by musher extraordinaire Jamie Nelson. I’ve gotten to hear quite a bit about Jamie and her expertise, so I’ll be looking forward to lots of learning while she’s here.
Immediately after boot camp will be Malapalooza: a chance for people from around the country (world, possibly?) to come together to run their Malamutes, share secrets and enjoy each other’s dogs and company. I’m not sure how many people will be on the ranch all at once -- latest number I got from Twila was around 20 --  but I’m sure the cabins will all be past capacity. It will be a different scene from the usual four person party up here.
On top of everything I’ve just covered, we’ve been adjusting to the barn morphing into a nursery. Almost all of our ewes have had their lambs, and three of our four goats have had their kids. In addition to the 20 or so adult stock in the barn, we now have over 20 young’ns running around, as well as the rescued Great Pyrenees that still remain. That’s a lot of energy happening under one roof right now.
Hopefully that should catch you up to speed. I hope I’m caught up too; Jamie is arriving tomorrow evening, which is when the real work will begin. I’ll be sure to post some pictures of the babies (including more of the puppies, which I forgot to mention amidst all the other babble – they’re doing great, getting cuter and squirmier by the day). Until next time!
-          Peter
Posted by blog4thered at 7:48 PM No comments:

Well, Kinky had her babies and they are finally ready for their blog debut. Presenting the Eagle Cap Extreme Litter: (da da dada daaaa)

And it is officially muddy season here at Quinault!! Check out our latest training run video:


Still getting some miles in, I love spring training. It is where you get to correct all the bad habits you let your team develop over the winter:-)

Posted by twilambaker at 1:56 PM No comments:

Hi all. Here are some pictures I've taken over the last couple days, just so you have some context with all the information that's being thrown at you. 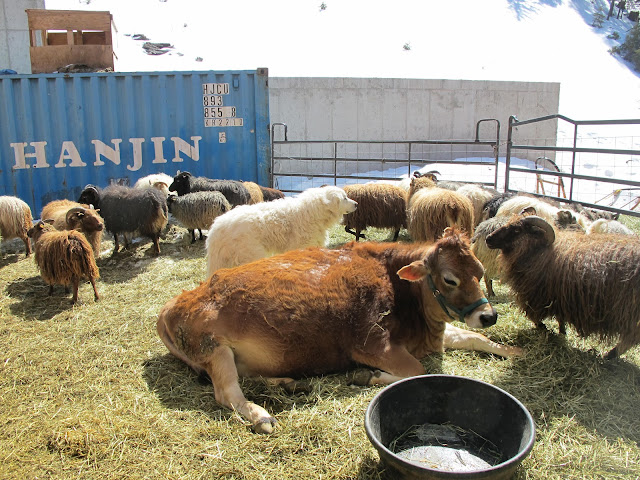 Here's all of our expectant mothers, with one of our guardians, Zaire, in the middle. 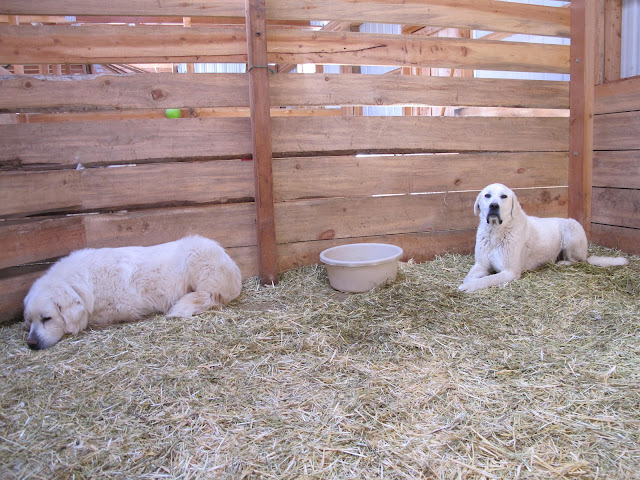 This is the first stall of Pyrenees, the friendlier group. Originally there were five, but two were sent to homes and the puppy, Ivy, is out with our ewes. These two have a home lined up. 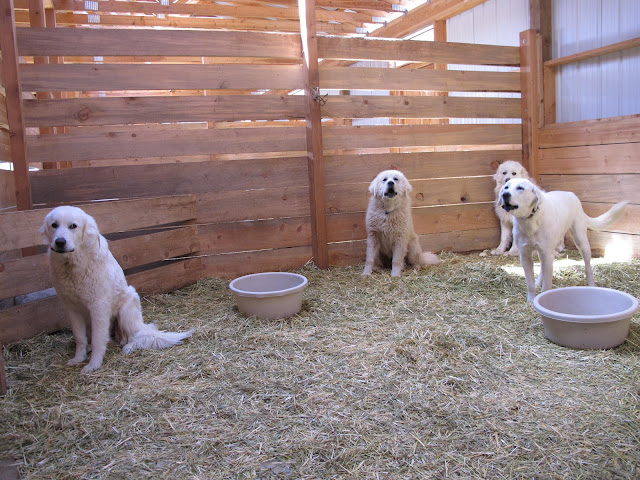 Here's the second stall of Pyrenees. You can see that they're not as comfortable with me being in the stall with them yet (there's one hiding in the manger). Two of these dogs have a home, and three will probably be staying with us. 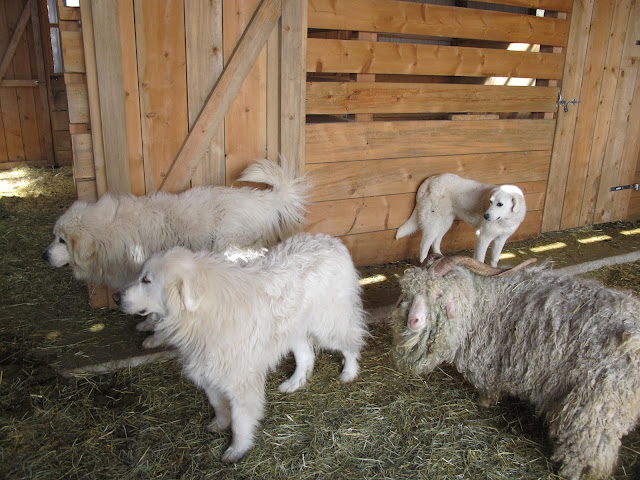 Our three guardian dogs in the barn: Ivy, Dolly, and Zaire in front. Oh, and there's Wrinkles, who's always nosing his way into things.

Yesterday, Morgan and I went up the mountain to do some repair work on our snow cat, which broke down on the trail. Because of where the Bombie ended up, the only viable way we could get to it was by dog sled. We thought it was pretty fitting, and exciting, to have a true working team for the day, so I took some pictures. 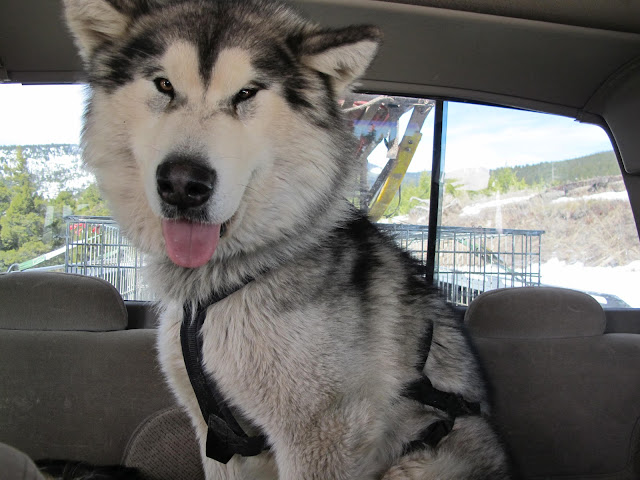 Havok got to sit in the back seat of Morgan's truck for the drive up. 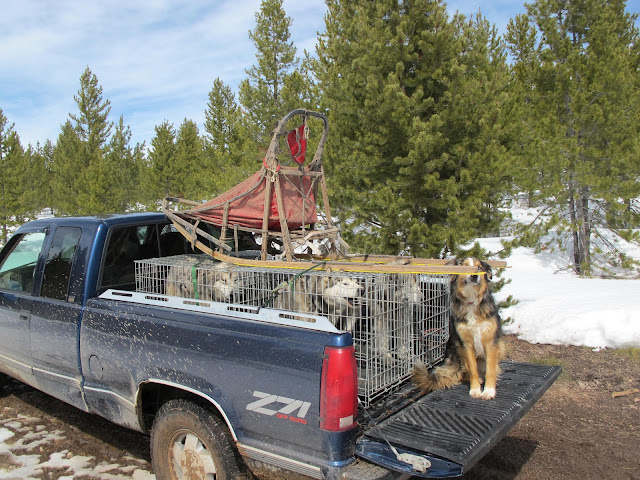 Here's our setup for the excursion. 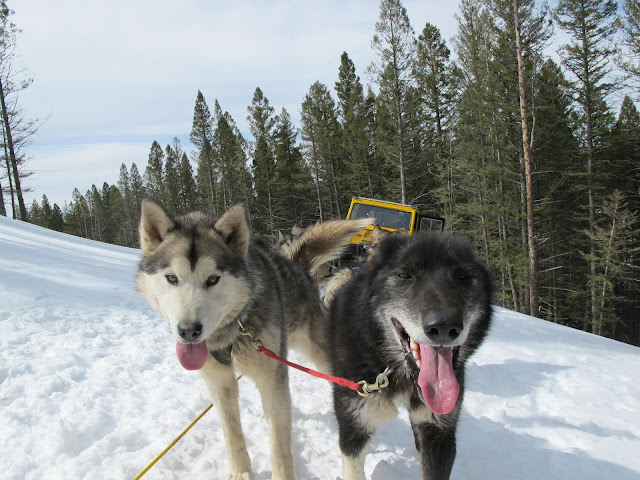 Enrique and Rayon in lead - we hooked the team up to the Bombie while we worked. 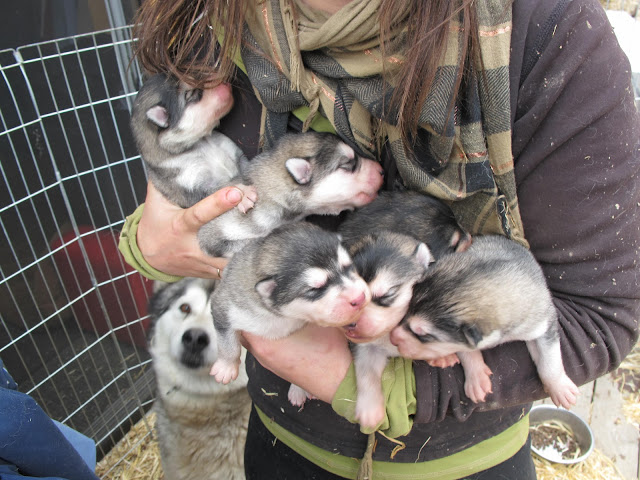 Finally, puppy picture. Morgan had trouble holding on to them because they were squirming so much. You can see a concerned Kinky in the background.

Hope you enjoyed the slide show!

Hi all! First, allow me to explain my hiatus.
After working hard this winter, Morgan and I were able to take a week off and head to Salt Lake City to be with our friends. It was a fun week filled with concerts and movies and electrical heating and a lot of civilization.
Once we got back, it was time to say goodbye to Craig. Craig came here in October to work through our busiest time, and now that spring is upon us, he’s left to explore other things. Specifically, he’ll be exploring the entire west coast of the United States, as he’ll be hiking 2000+ miles from Mexico to Canada along the Pacific Crest Trail. This is yet another leg on Craig’s Great Adventure, having spent two years teaching for the Peace Corps in Ghana before coming to work here on the ranch (you should know that Craig had never seen snow before mastering the art of mushing).
Craig taught me more than I’ve been able to retain since I’ve gotten here, not least of which was our first meeting in which he showed me the intricacies of running a snow blower. We’ll miss his uncanny knack for solving our everyday ranch puzzles, his tendency to giggle at cat videos, his undeniable charisma whilst performing karaoke, and of course his constant sense of humor. Happy trails Craig.
Once we’d tearfully sent Craig on his way, it was time to host our first ever Learn to Mush Experience. Stacie, Drew, and Caryn came out for five days along with Stacie’s malamute, Jasmine, who was a working dog here once upon a time. We couldn’t have asked for a better trio to be our guinea pigs. Over the course of the week, they were involved with feeding and taking care of the dogs, one on one training, driving the team on quads and on sleds, and even helped out around the barn for a spell.  Through it all, they were good natured and enthusiastic, and I’d imagine all of us would be more than happy to host them for a repeat visit.
At the same time that Stacie, Drew, and Caryn were staying, we also had a different group of guests. Twila and her friend Luana Reed teamed up to rescue 30 Great Pyrenees from a farm that were at risk of being put down. Altogether we had 11 staying in our barn for a few nights, and now that 3 have been given to homes, we have eight left. One, a puppy, has already graduated to guardian dog status, and she’s been learning quickly from veterans Zaire and Dolly. I picked the name Ivy for her, since she stuck to the wall her first few days here. Now she runs up to us every morning, tail wagging. We’re hoping for similar results from the other Pyrs: they all came to us deathly afraid of strangers and certainly confused with their sudden change in environment.
As an extra bonus, Kinky had her litter of puppies while our guests were here! Ever gifted with her timing, Kinky went into labor on Friday evening, and by late Saturday night we had three big boys and three big girls. They’re now two days old, and as soon as I’m done writing I’ll be helping Twila assign their names (pictures are sure to follow). Mom is doing great, and her pups are all strong and wiggly.
So, with all that explained, I hope you’ll forgive me for my break from blogging. Until next time! (Which should be much sooner.)
-          Peter
Posted by blog4thered at 7:03 PM No comments: